They jumped into action to serve their community, fight for a cure and bring even more hope to more children.

They made a big splash, too.

At the recent Denver Open Water Swim for Swim Across America, Empower associates — and their families — teamed up together to help do their part in the nationwide effort to conquer pediatric cancer. Passionate employees from all across our company were on-site at Chatfield Reservoir in Littleton to show their support for such a critical cause. As volunteers, they helped raise money and awareness to fund key research initiatives, clinical trials and patient programs on a local level.

“Everyone was so enthusiastic and happy to be there,” said Angie Ruddell, engagement and corporate social responsibility manager. “We all left inspired to have been involved in such a very special day.”

Empower joined forces with Swim Across America to help produce WaveMakers, a docuseries that aired on the Discovery Network this summer. As a sponsor, Empower hosted a team of patrons for the Denver event. This year’s charity swim netted more than $185,000 in donations, with all of the proceeds benefitting the Center for Cancer and Blood Disorders at Children’s Hospital Colorado.

Those who signed up to lend a hand were tasked with a variety of important jobs, duties and responsibilities.

Some people cruised around on paddleboards and patrolled the course as lifeguards. Others walked along the shore as land spotters in search of any competitors in distress. Another group manned the Empower tent, designing signs for the swimmers and cheering for them as they crossed the finish line.

“Who can’t get behind an organization that’s helping kids beat cancer? It was a lot of fun,” said Greg Howell, a senior communications strategist. “This was a great way to give back and make a positive impact."

Howell’s daughter, Reagan, was one of more than 200 participants to dive in and take a dip at Chatfield Reservoir.

“She loved it,” said Howell, who worked in the Empower tent. “She didn’t hesitate to come out and hang with me.”

Reagan, age 12, is no stranger to the pool. She swims competitively for a year-round club in the Denver area. But with a heavy heart and a stout spirit, she honored her grandma — and the thousands of children suffering from cancer — by braving the waves in her first-ever open-water race.

When Reagan was 6, her grandma was diagnosed with stage 4 breast cancer, so she witnessed the devastating effects a serious illness can have on a person of any age. “We thought she was going to die,” Howell said. “Reagan saw that.” Grandma, though, persevered. After enduring a long battle with the disease, she’s been cancer-free since 2016 and is still going strong at 80 years old.

“Reagan was extremely inspired and motivated to celebrate her,” Howell said. “It was exciting to watch her perform.”

On top of completing the emotional swim, Reagan also helped raise more than $1,000 on her own for Team Empower.

“It was a proud dad moment for me,” Howell said. “We both felt a sense of pride in what she was able to accomplish.” 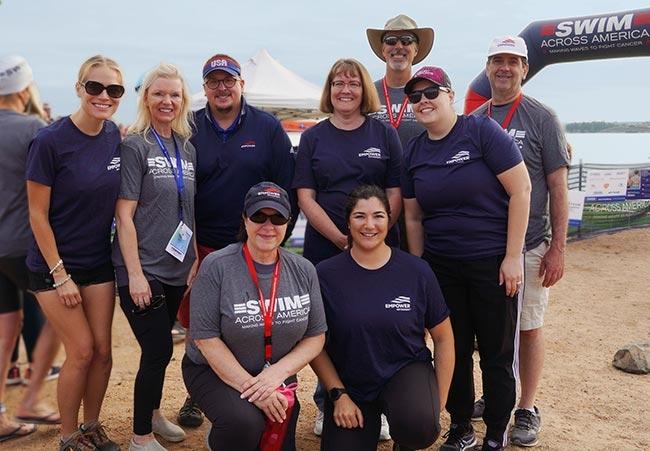 Luiken, project lead for the Empower Fund Partner Program, was diagnosed with a rare cancer called chronic myeloid leukemia (CML) in 2011. She was actually born with the condition, but it didn’t develop until she was an adult. CML is a slow-growing syndrome that attacks the blood and bone marrow.

“Why it only chose to show up later in my life is a mystery to all of my doctors and myself,” said Luiken, who was a member of the shore safety crew during the event. “If it had reared its ugly head when I was a child, I can almost guarantee I wouldn’t be here right now. I feel very lucky to be healthy.”

In fact, Luiken is currently part of a clinical study that is focused on finding a cure for CML as well as many other types of childhood cancers. As a result, she’s able to live a normal lifestyle without any complications or restrictions. That’s why organizations like Swim Across America mean so much to her.

“I wanted to get involved because I am personally experiencing the advancements in treatment and medication that are evolving every day,” Luiken said. “I am so grateful for that opportunity, but there are so many who aren’t as fortunate. It’s often not clear how much of a difference events like this make.

“But I can tell you, this one matters.”