A dedication to Dad: Empower sisters walk with heavy hearts

They may be biased, but to Marybeth Daubenspeck and Dolores Dunigan, their dad really was the “World’s Best Dad.”

Not even Alzheimer’s could take that title away from him.

He was smart, funny and caring — and so much more. He was a wizard at completing newspaper crossword puzzles. He could recite all 50 states and 50 capitals in the blink of an eye. He enjoyed a good book and a better conversation. And, of course, he told the most hilarious jokes, no matter how corny.

“When I was a little girl, he was my superhero,” said Dunigan, a lead retirement representative. “He was a great man.”

On Saturday, the two sisters stepped up to pay tribute to their dad and honor his life at the annual Walk to End Alzheimer’s in Denver. Both Daubenspeck and Dunigan sported purple and teamed up with close-knit family members who were in town for a wedding to help raise support for the sixth-leading cause of death in the U.S. They hiked the two-mile loop around City Park with heavy hearts and strong spirits. 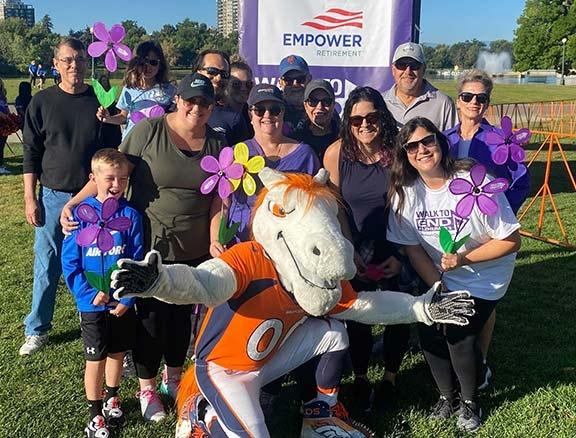 After enduring a five-year battle with the devastating disease, their dad passed away in 2015 at the age of 87.

“It was a celebration of him,” said Daubenspeck, vice president of government markets. “We were happy to be together and to show our love for him. I really believe, if we keep fighting, we can find a cure for Alzheimer’s or — at the very least — discover meaningful ways to help slow down the progression of it.”

Many passionate associates from across our company also hit their stride and participated in the Walk to End Alzheimer’s.

The local version of the event, which is sponsored by Empower, featured over 4,000 people who marched in the parade on-site or virtually from their own neighborhood. Overall, our organization and the Denver Broncos joined forces to donate more than $50,000 to the Alzheimer’s Association.  The winning effort will help provide research, money and hope to the 6 million Americans living with the disorder.1

“It was a beautiful morning to get outside and make a terrific impact in our community,” said Angie Ruddell, engagement and corporate social responsibility manager, who dedicated her stroll to her late grandpa. “Seeing everyone come together for such an important purpose, and being a part of it, was pretty cool.”

It was pretty special, too.

For Daubenspeck and Dunigan, the opportunity to commemorate their dad is a moment they’ll always cherish.

“It was definitely emotional,” Dunigan said. “He was a big presence in all of our lives. We still think about him every day.”

About a decade ago, their dad slipped on a patch of ice and suffered severe trauma after plunging to the ground.

Prior to the accident, he had been displaying minor signs of confusion and memory loss. But after receiving treatment, undergoing surgery and then waking up from a medically induced coma, his symptoms only worsened. Remembering common things and performing routine tasks suddenly became major hurdles.

“To watch him go downhill, so fast, was just heartbreaking,” Dunigan said. “Everything became a struggle for him.”

In fact, his well-being had declined so rapidly that he never returned to his house following his stay at the hospital.

“He was a completely different person after the fall,” said Daubenspeck, who became his caregiver as both her mom and dad moved into her home. “You could tell he was really lost inside, which was hard to handle.”

As most patients, their dad dealt with serious mental challenges. For example, Daubenspeck said, he would occasionally ask for directions to his bedroom or offer to pay the bill after eating dinner at the kitchen table. She even heard him “teaching” a Sunday school class in the middle of the night.

“People with dementia, they know they don’t know anymore,” Daubenspeck said. “To have him sit there for hours, days and months trying to fill in the blanks was difficult to accept. He was desperate to remember.”

Instead of dwelling on any of the negatives, though, Daubenspeck and Dunigan chose to embrace their dad’s positive energy.

“Most people feel it’s the saddest thing, but he became the softest, gentlest person,” Daubenspeck said. “It was a privilege to spend that time with him. He was the kindest soul — and I treasured that side of him.”

Added Dunigan: “He never once gave up, so our whole family rallied around him. That’s what made him the best.”