Did Congress save room for seconds?

In March, the House of Representatives voted overwhelmingly in support of the Securing a Strong Retirement Act of 2022. The proposed retirement bill, which is known as SECURE Act 2.0 for short, now awaits approval from the Senate and then a signature from president Joe Biden.

The policy builds on the original SECURE Act — the Setting Every Community Up for Retirement Enhancement Act — from 2019. If passed, the bipartisan legislation could help more individuals better prepare for their future amid today’s uncertain economic landscape.1

Read on to learn more about SECURE Act 2.0 and how it could impact you, your money and your financial confidence.

As currently constructed, SECURE Act 2.0 is aimed at enhancing the retirement savings experience for working Americans. Some of its key elements focus on incentivizing people to save more and prioritize their long-term goals.

When is SECURE Act 2.0 being voted on?

The exact timeline isn’t known, but some political experts believe the Senate will act on the bill later this year.2 It’s important to note that if and when it’s passed, the Senate’s version could look much different from the one approved by the House. Changes and modifications to many of the provisions are almost certain.

With so much to unpack, we’ll keep everything high level and highlight some of the bill’s most critical features.

This is the big one.

SECURE Act 2.0 would require employers that establish a 401(k) or 403(b) program to automatically enroll all new employees. They would be enrolled at a minimum 3% contribution rate, which would increase annually until 10%. Employers could elect a higher percentage, but it wouldn’t be able to exceed 10%. Workers, on the other hand, would have the option to opt out or choose a deferral rate that fits their needs.

New businesses (three years or younger) and small employers (10 or fewer staff members) would be exempt. 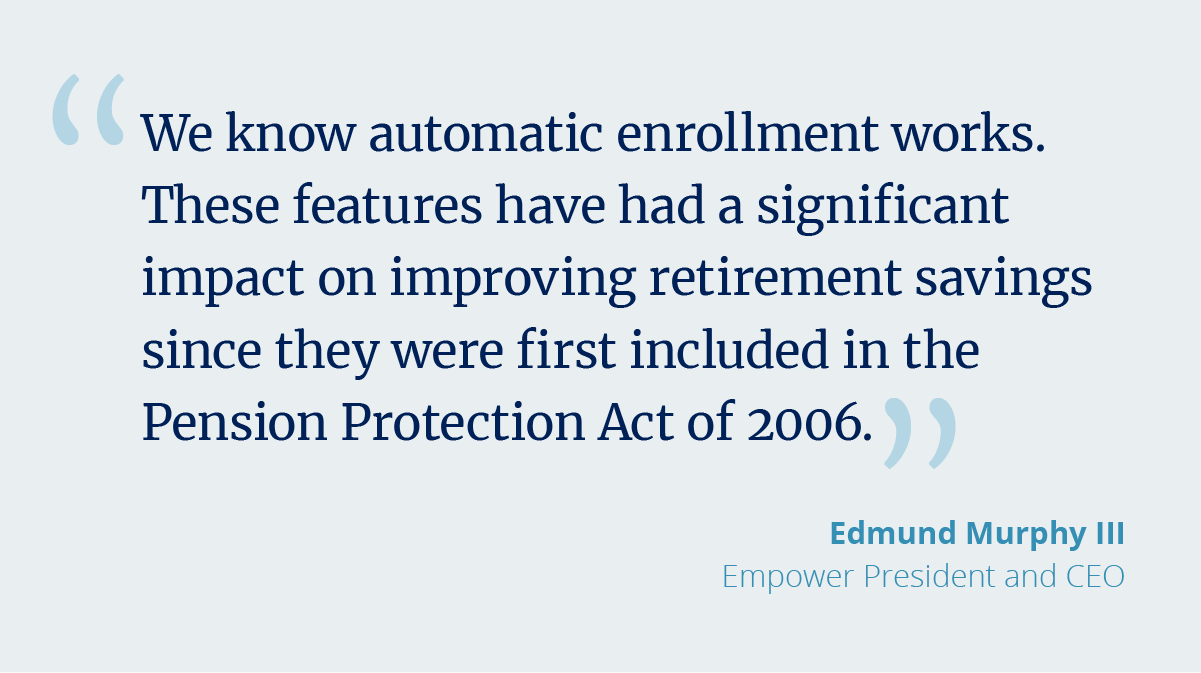 CHANCE TO PLAY MORE CATCH UP

Under SECURE Act 2.0 you’ll have more room to play catch up. People ages 62, 63 or 64 would be eligible to sock away $10,000 in catch-up contributions to their 401(k) or 403(b) accounts (indexed to inflation). While catch-up limits would revert back to normal levels once a person turns 65, those three years would provide an extra opportunity to pad their nest egg.3

Just as its name implies, a required minimum distribution (RMD), is the minimum amount of money you must withdraw from your tax-advantaged retirement accounts each year, and that amount is based on life expectancy. RMDs were put into place to ensure the IRS receives its piece of the pie; in other words, it’s the government's way to eventually collect income taxes on your funds.5

The SECURE Act raised the RMD starting age to 72. But SECURE Act 2.0 goes a few steps further. Workers would have to begin making withdrawals from their retirement account at age 73 in 2023, 74 in 2030 and 75 in 2033.4 This means your money may have more time to grow than if you were required to begin taking distributions at age 72.

Many borrowers choose paying back their debt over saving for retirement. Under SECURE Act 2.0 they won’t have to make a choice. Under this provision, companies would be allowed to match student loan payments up to a certain percentage and deposit their matching contribution into the employee’s retirement account.6

This arrangement could greatly influence people early in their careers as they juggle paying off student loans, managing basic living expenses, and saving for the future. 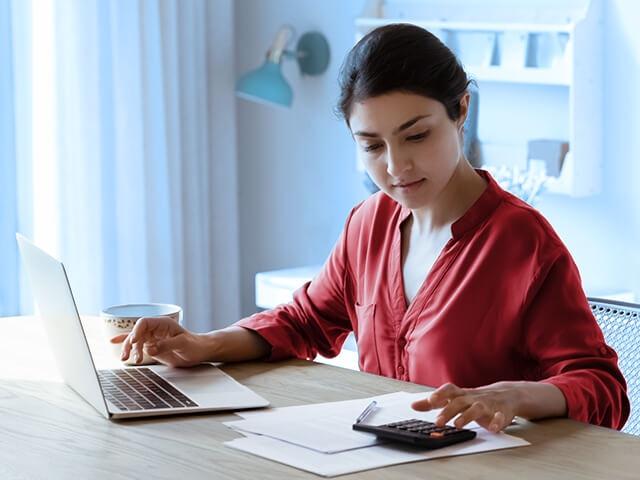 The saver’s credit is a tax credit for middle- to low-income earners who are contributing to their retirement accounts. (As it currently stands, it’s worth up to $1,000 for single filers and $2,000 for married couples filing jointly.) Created in the early 2000s, the saver’s credit provides people with a greater incentive to build their nest egg, and because it’s a credit, it also reduces the amount of taxes you may owe.9

Small businesses could benefit in big ways. Among the many potential incentives in SECURE Act 2.0, the bill would encourage smaller companies to sponsor a workplace retirement savings plan by giving tax credits to offset any administrative expenses. An additional tax credit (which would be capped at $1,000 annually) would be available for defined contribution plans that provide employer contributions.10 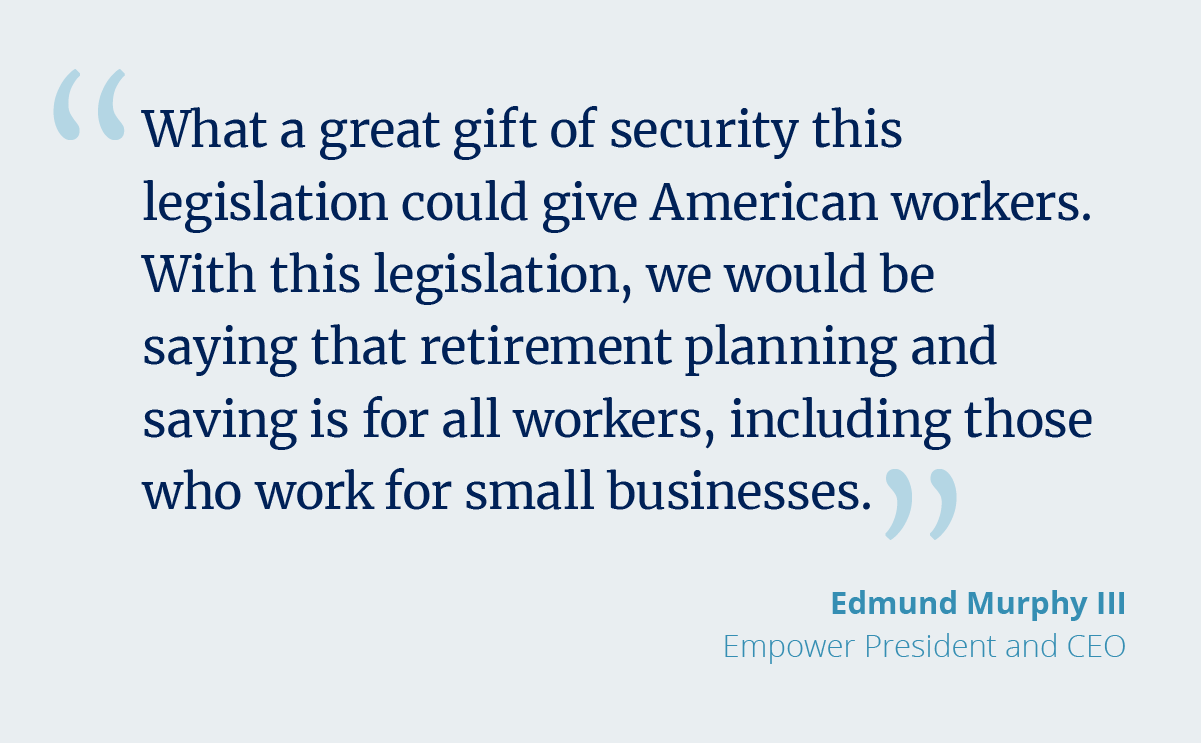 Part-time work could mean full-time treatment. Under SECURE Act 2.0, employers would have to give certain part-time workers the opportunity to enroll in and save in their 401(k) plan once they meet certain requirements. In order to be eligible, part-time employees would be required to hold their job for two consecutive years, a change from the current three-year rule, and clock in for at least 500 hours each year.11

SECURE Act 2.0 is designed to further promote retirement security. By helping American workers better prepare for their financial future, this legislation could improve the financial confidence of many – especially during times of rising inflation and market volatility.

Of course, this is a comprehensive bill and entails much more than what is listed and described above. For a more analysis on SECURE Act 2.0, visit www.congress.gov.

All about asset classes

Understanding asset classes is key to the battle-tested investment strategy of diversification.

How to measure investment performance

Paying attention to investment performance can help you make informed decisions about where to invest.

What percentage should I contribute to my 401(k)?

Empower insight reveals people who set their contribution rate to at least 10% are on track to replace 100% of their working income down the road.